“The race that stops a nation” – how absolutely absurd! 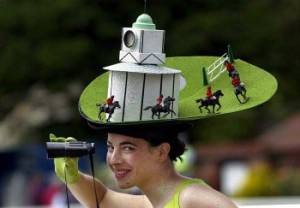 The Melbourne Cup is here again (first weekend in November) and so too are the silly hats, champagne breakfasts and obligatory office ‘pools’.

Yes, vast segments of the nation (including the populous media) certainly do get swept up in the furor and do ‘down tools’ for a brief moment BUT to say the nation grinds to a halt is just a tad boastful.

Compared to the Kentucky Derby in America or the Grand National in the United Kingdom, Melbourne’s little race around the paddock is rather tame (lame) BUT do we hear any such boastful claims from the Yanks or Brits…?

Yes, Australia is a nation of gamblers and Yes, Australians will ‘skive off’ at the first chance they get but NOT EVERYONE!

Australia is full of decent hard working folk who do not gamble and who do not follow the horse racing and who do not ‘skive off’ at the first chance they get. There are literally millions of Australians who have no idea what the Melbourne Cup is let alone when it is to be run. Trust me… the nation will not stop!

At some stage Australia is going to have to take responsibility for this embarrassing boast that does nothing except illicit ridicule from our international neighbors. Lets hope it’s sooner rather than later.