Have you ever felt that you exist in a world completely different to that of others around you? Could it be that there is YOUR WORLD and another PARALLEL WORLD… only 5 minutes away? 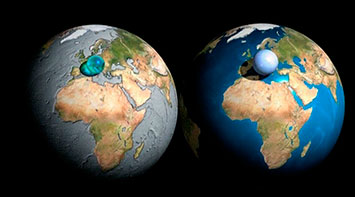 Now, I’m not talking about Einsteins Theory of Relativity, any sort of time travel, anything hypothetical or ‘cosmic’… I’m talking about a real, tangible 5 minutes.

Here, let me give you an example:

I dropped my daughter off at Kindy (kindergarten) this morning as I have many times before BUT today the family was running ahead of schedule and so I dropped her off a mere 5 minutes earlier than usual! I might as well have been on a different planet!

For a start, the car park at Kindy was worse than ‘Etoile’ in Paris on a Saturday night with cars going each and every way, with drivers whose sole intent was to get into or out of the car park at any cost, using whatever road (and pavement) space available. A far cry from my usual sedate meander into the car park and choice of parking bays – in essence ‘a world apart‘.

And then there was the Kindy classroom itself, with it’s raucous cacophony of sounds and what can only be described as ‘organised chaos’. Parents darting here and there, kids bawling their eyes out and others wrecking absolute mayhem… with the teachers desperately trying to gather their ‘brood’ before starting the day. Again, a far cry from the usual 1 on 1 ‘handing over of responsibility’ eye contact I have enjoyed with the teacher and the usual hugs and kisses and quite salutations with my daughter.

The drive home and a quick stop off at the local supermarket again revealed another world to me. Armed with my usual gusto and myopic focus, I entered the supermarket ready to do battle with the throngs of other housewives (as we do every other day) but Hey Ho… deserted! Besides the odd solitary shopper here or errant school kid there, the place was empty. Shopping was a breeze and I was out of there without so much as a scratch! 5 minutes early and a world apart from the usual scenario.

So you see for years I have lived in a certain area, done things and interacted with society in a certain way with the belief that this was the ‘way of the world’. Today, I realised that there is another world out there, a ‘2nd world’ if you will that exists just 5 minutes away from my world..!