“The race that stops a nation” – how absolutely absurd!

The Melbourne Cup is here again (first weekend in November) and so too are the silly hats, champagne breakfasts and obligatory office ‘pools’.

Yes, vast segments of the nation (including the populous media) certainly do get swept up in the furor and do ‘down tools’ for a brief moment BUT

END_OF_DOCUMENT_TOKEN_TO_BE_REPLACED

…And the winner for this years Malaysian Formula 1 Grand Prix is… none of the usual 11 teams that make the starting line up but instead it’s, Team Orders! Who? 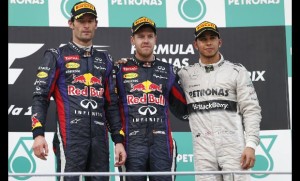 In fact, let me take that one step further and say that the entire podium was filled with drivers from Team Orders.

The unsavory side to Formula 1 once again reared it’s ugly head yesterday not once, but twice. Team Red Bull Racing and Team Petronas Mercedes (home race) both decided to ‘fix’ the results to ensure maximum benefit to themselves at the expense of the racing spectacle and paying racing fan. Both teams had different reasons and different ways of going about it but the results were the same, the drivers placed on the podium were not the most deserving.

END_OF_DOCUMENT_TOKEN_TO_BE_REPLACED

So… the big question all F1 fans want the answer too is:

Is it the car or is it the driver that determines who wins the race?

After listening to Sebastian Vetel’s comments after qualifying last week, and then comparing it to the measured response from his team mate Mark Webber, you begin to wonder…

END_OF_DOCUMENT_TOKEN_TO_BE_REPLACED

When the NRL is involved, that’s when!

The ABC network’s flagship current affairs program ‘Four Corners’ broadcast last night, covered the endemic problem of gang rape (or rather ‘female abuse’ in ABC speak) in the Australian NRL. The one hour program was an absolute draw dropper for all the wrong reasons!

END_OF_DOCUMENT_TOKEN_TO_BE_REPLACED

The Irish did what..?

A very learned friend of mine assures me that it is not the Hawaiians nor the Australians who deserve the credit for inventing or discovering ‘surfing’ as we know it today, but rather the Irish!